Triz Arte has earned limelight for its uniquely designed showroom which has strikingly good looks and an ambience that can leave the visitors under a spell. The organization had its moment of success when it got rewarded with one of the most coveted trophies in the industry.

In 2011, Triz Arte was awarded in the Contract Interior Competition (New York) under the best showroom category. The prestigious award has cemented the goodwill and reputation of the organization further and has lent a strong boost to the designers and employees of the company.

In addition, over the course of the three years of its existence, Triz Arte has acquired a well deserved reputation from its clients and appraisers. Such heart-warming gestures have been vehement testimonials of the organization’s high-quality work. It hopes to continue in its good work in the future and intends to weave its magic wand further. Assisting everybody in slipping into spaces which are heavenly for both residential and commercial needs.

2017   Publish in Straits Times , Lifestyle in “The Chic Apartment” column 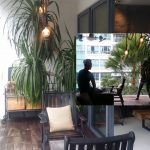